As a young child, Jesse Paul (Ka-khun-nee, Black Raven) encountered significant trauma in his life. His father and all five of his siblings died in the Nez Perce War of 1877. After the tribe surrendered, Jesse and his mother were sent to exile camps at Fort Leavenworth, then Baxter Springs, and finally in Tonkawa, Oklahoma. The camps were near swamps that caused malaria to spread throughout the camp, killing many of the tribal members who had survived the war.

Yet more trauma awaited Jesse. On February 20, 1880, he was one of five children of the Nez Perce tribe sent to Carlisle Indian School in Pennsylvania. Two years later, three more Nez Perce children arrived at Carlisle. From 1880 to 1918, 126 children from the tribe would attend Carlisle. Three of them are buried there still today.

In a photo taken the five Nez Perce children in their Carlisle uniforms with recently cut hair, Jesse has his hand tucked inside his shirt. His granddaughter, Roberta Paul (Tow-le-kit-we-son-my), has done extensive research and work to heal the generations of trauma in the Paul family. She has often wondered about the pain a mother must have felt sending her only surviving child off to boarding school. In a dream, her grandfather told Roberta that while boarding school could take the outward appearance away, it couldn’t take all his Indianness. She believes that he’s holding a medicine bag in his pocket, given by his mother to keep him safe.

While at Carlisle, Jesse studied and worked and completed two outing experiences, which were part of Richard Henry Pratt’s model to help assimilate the children into white society. His outing experiences included working from April 1884 to September 1886 at the farm of Abdon Longshore and working from March to September 1887 at the farm of Jas Cadwalader. Both farms were in Dolington in Buck County, Pennsylvania. Jesse also marched at the Centennial Parade in 1886 in Philadelphia along with other Carlisle students.

Despite efforts of the school to strip students of their culture and their language, the Nez Perce students persisted in using their language in secret. Jesse Paul still spoke the Nez Perce language even after eight years at Carlisle, which is a testament to his spiritual strength. After departing the school, Jesse returned to the Nez Perce reservation. He met and married his wife, Lydia Conditt (Tow-le-kit-we-son-my, Woman of the Forest), who had spent five years at Chemawa boarding school in Oregon. Together, they had what was considered a successful, progressive Indian family.

Carlisle school corresponded with some of their former students asking for updates, and Jesse replied at least twice with letters about his family and his work. Using the skills he acquired at Carlisle, Jesse worked as an interpreter and a forest ranger for the tribe. He also worked for Alice Fletcher, who was assigned to determine allotments for the Nez Perce as part of the Dawes Allotment Act of 1887. Jesse chose an allotment in the Camas Prairie and started the Paul Ranch, which is still owned by the Paul family today. His successful ranching operation plus other jobs ensured financial security for the family.

Jesse and Lydia Paul had 11 children, through two died in infancy. Of their nine living children, seven attended Indian boarding schools during their teen years.

Today, the Paul family still has the trunk that Jesse was given for his belongings when he arrived at Carlisle, along with photos, correspondence, and other records. They also still have the trauma of war, exile, and boarding school, though much work has been done to heal.

Roberta Paul said one of the biggest lessons she learned from her father, which she believes was passed down from her grandfather, is the ability to accept life as presented to you. Her grandfather couldn’t change his circumstances, but rather had to accept them. In her research surrounding trauma, Roberta encountered the writings of Viktor Frankl, a Holocaust survivor. Some of his work focuses on the need for a why to survive the how. Roberta believes that for her grandfather, that why was a desire to keep his family story alive and help his tribe.

Many members of the Paul family have visited the Carlisle school grounds as part of their healing journey, because it’s important to go back to where the wounds occurred.

“We have walked the grounds and told the story,” said Roberta. “We have also begun to forgive, which is like an onion — there are many layers on the onion to get to the core.”

Nez Perce children who arrived with Jesse Paul in 1880:

New Perce children who arrived in 1883:

The three Nez Perce children who died at Carlisle and are still buried there today are Luke Phillips, Samuel John, and Rebecca Little Wolf.

Photo of the first five Nez Perce children to arrive at Carlisle Indian School, where they faced the trauma of boarding school and forced assimilation after surviving the trauma of war and the trauma of exile. 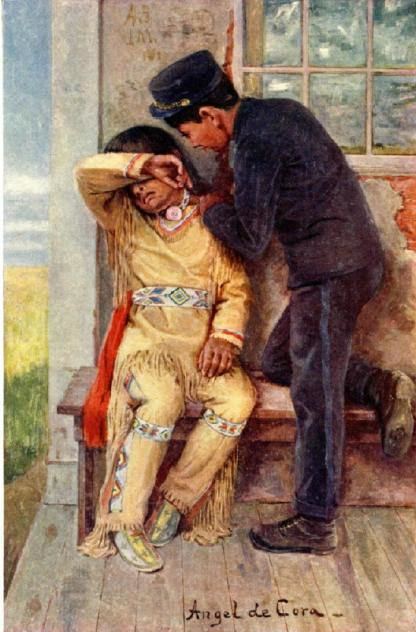 Statement of Deb Haaland, before the Senate Committee of Indian Affairs 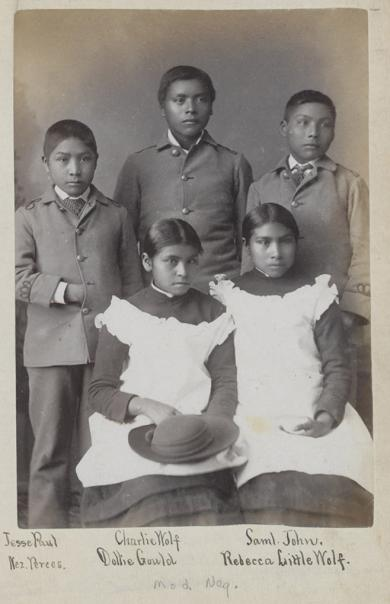